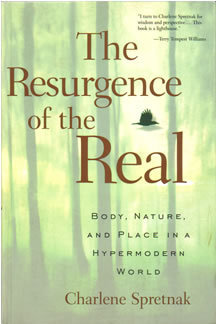 The Resurgence of the Real

The Los Angeles Times Book Review named The Resurgence of the Real one of the "100 Best Books of 1997."


Publisher's Summary of The Resurgence of the Real

The closing years of the 20th century find Americans skeptical of modern institutions -- the political system, the globalized economy, the public schools -- and their abilities to solve the most basic problems of our time. Amid the rising tide of discontent, the public debates -- including the "culture wars" -- seem to be a mere spinning of wheels.

In a penetrating analysis of our times, Charlene Spretnak asserts that both the liberal and conservative sides in those debates are situated in the very orientation that created the modern crises: the mechanistic worldview with Homo economicus at the center. The grand claims of modernity no longer inspire confidence because its destructive effects seem to be multiplying. The author, an influential public intellectual, speaks poignantly to our growing sense of what has been lost and what is slipping away.

Yet Charlene Spretnak argues persuasively that the intensification of the modern crises is not inevitable and is already being challenged by an impressive network of corrective efforts. The new acceptance of holistic medicine (forced by the healthcare crisis), the new understandings in science of nature's powers of dynamic creativity and self-organization, the new political opposition of community-based activists to the forces of globalization, and the new surge of independence efforts by ancient nations that have been devoured by modern states -- all are part of an emergent value system that counters the modern conception of liberty as a flight from body, nature, and place.

After identifying "epochal rumblings" embedded in the nightly news in the 1990s, Charlene Spretnak illuminates the sources of the modern condition with exceptional clarity. Moreover, she reframes "the other history" of the modern era: the ecospiritual lineage of movements that resisted the corrosive effects of the industrialized modern world. These include the Arts and Crafts movement, the cosmological schools of painting, the stream of Modernist writers and artists who did not embrace the "machine aesthetic" after World War One, and Gandhi's "Constructive Program." The grassroots movements today that are forging a new politics of local and regional revitalization beyond left-and-right are heir to a rich tradition, to which the author brings original interpretations.

Finally, Charlene Spretnak concludes her wide-ranging exploration with an engaging story of an American heartland city in the near future that has largely decoupled from the destructive dynamics of the globalized economy and initiated a range of pragmatic alternatives in its region.

Both a sharp critique and a graceful performance of the art of the possible, The Resurgence of the Real changes the way we think about living in the modern world.

"Written with great fluency, carefully researched and richly annotated, this is a superb book. Challenging and engaging on every page, it is a book [for] everyone concerned with the fundamental problems of our time and interested in 'the big picture' -- the decline of an outdated paradigm and the emergence of the postmodern, ecological vision of reality that will be crucial for the survival of humanity in the 21st century."

–Los Angeles Times Book Review
"Spretnak's voice is both prophetic and richly intellectual. She challenges the mind, stirs the heart and shames the conscience.... [This is a] heartfelt, valiant effort to illuminate the darkness and mend the fractured Spirit."
–San Francisco Chronicle Book Review
"Absolutely brilliant. ... a passionate book. ... The Resurgence of the Real [is] the work of a writer of exceptional intelligence and subtlety. ... [It] is stimulating, illuminating, and enobling."
–Resurgence, (UK)
"In her far-ranging, in-depth study of the structure of contemporary alienation, Spretnak joints the ranks of gifted writers qua intellectual social analysts like Lewis Mumford. Economics, politics, history, sociology, aesthetics, and psychology are brought to bear in support of her thesis.... In this vision, the author develops a schema of social criticism that moves from the modern through the deconstructionist postmodern and ecological postmodern era.... Although much of the material studied is dense, Spretnak keeps her treatment lively, accessible, and challenging."
–Publishers Weekly
"A remarkable book.... Spretnak intelligently blends scholarship, lyrical intuition, and passion.... The great gift of the book is Spretnak's postulation of 'ecological postmodernism.' But she does not present mere theory.... History and possibility, past and future are in dialogue with body, nature, and place.... Using her own theories, Spretnak enacts the possible ...[with] language of deep feeling, great caring, and spiritual insight."
–New Age Journal

"A book to infuriate those who claim that the truth is not sensuous, that intimacy with nature must be coldly objective, and that spirituality is a frivolous bad habit of the human species. If a religious revival is soon to sweep the planet, then this is its embryonic testament."
–Whole Earth magazine

"Charlene Spretnak's The Resurgence of the Real is a remarkable intellectual tour de force, a mordant yet deeply humane critique of where we went wrong in the modern world -- and the way forward to a wholesome post-industrial future."
–Theodore Roszak, author of The Memoirs of Elizabeth Frankenstein
"I turn to Charlene Spretnak for wisdom and perspective. She inspires social change from the roots of our humanity, one that calls for compassionate intelligence over superficial reactions. The Resurgence of the Real reminds us we cannot survive the seduction of modernity. Our path is through the body, through deep engagement with where we live and whom we live among. This book is a lighthouse."
–Terry Tempest Williams, author of Refuge and Desert Quartet
"With this book, Charlene Spretnak takes her place among the great visionary thinkers of our time.... 'Ecological postmoderism' is a pathway toward human sanity and fulfillment via the acceptance and embrace of ecological imperatives. Whether you are an activist, a public policy leader, an academic, or are simply interested in breakthrough thinking, this book is a must."
–Jerry Mander, editor of The Case Against the Global Economy
"The Resurgence of the Real is nothing less than a spiritual guidebook for life in the next millennium, rediscovering what is essential for human fulfillment, while deftly warning us about what is catastrophic. This is a passionate, learned, ennobling, and best of all, a persuasive approach to the future that is neither technophilic nor technophobic."
–Richard Falk, Professor of International Law, Princeton University and UC Santa Barbara
"For its comprehensive perspective, clarity of presentation, critical insight, and contemporary relevance, Charlene Spretnak deserves serious attention from all who are concerned with getting out of the commercial illusions of the 20th century.... This is a superb book!"
–Thomas Berry, author of The Dream of the Earth