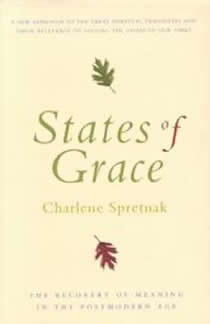 States of Grace: The Recovery of Meaning in the Postmodern Age

States of Grace makes the case that the antidote to both the meaninglessness inherent in the modern age and the "denial of meaning" declared by deconstructive postmodernism lies in the last place that proponents of either of those two orientations would ever look: the core teachings and practices of the four of the great spiritual traditions. These are Buddhism, Native American, Goddess, and Judaism and Christianity. The book also includes an appendix on feminist perspectives on the history of Western philosophy and the assumptions of deconstructive postmodernism.

"A compelling invitation to a spiritual awakening...., Spretnak demonstrates the relevance of spiritual issues to pragmatic concerns - political, economic, and psychological - of modern life, weaving the diverse insights of spiritual traditions into a tapestry of creativity and renewal."
- San Francisco Chronicle

"Profound.... In States of Grace Charlene Spretnak uses her rare gift for making a bridge from scholarship to 'the real world' .... Spretnak's vision - of a culture with its ties to the Earth renewed - comes across powerfully."
- Boston Globe

"States of Grace is one of the most eloquent expressions to date of that increasingly influential view of spirituality in which 'connectedness' is central - connectedness with nature, with each other, with ourselves. The book is a complex work, poetically written, passionately felt.... [It] presents a powerful vision of both global and personal transformation."
- Christianity and Crisis

"Charlene Spretnak's States of Grace is a passionate, convincing, important, and responsible work.... On every page, Spretnak writes with clarity and prophetic energy."
- National Catholic Reporter

"A sensitive - and political - exploration of the Abrahamic religions (Judaism, Christianity, Islam), Buddhism, Native American Spirituality, and Goddess spirituality, and an analysis of their influences on community and social justice."
- Ms. Magazine

"Charlene Spretnak has fashioned a web of meaning.... Her interdisciplinary approach makes manifest the subversive nature of the core teaching of the wisdom traditions and the power of even the simplest spiritual practice. She has created a unitive network of intelligence designed to flare across our political darkness, illuminating both the wreckage and new possibilities for communion and resistance to further ecological and cultural destruction.... I treasure this work; it is potent alchemy."
- Whole Earth Review