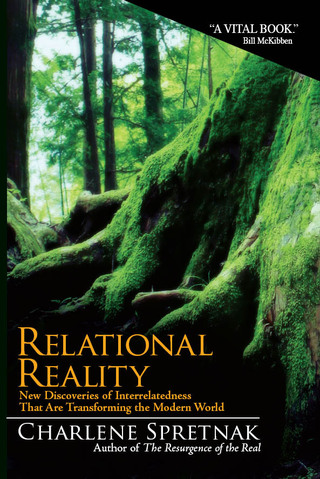 
“Our hypermodern societies currently possess only a kindergarten-level understanding of the deeply relational nature of reality.”

Relational Reality reveals the coherence among numerous surprising discoveries of the interrelated nature of reality, most of which were made since the mid-2000s. Kindred discoveries in the 20th century in physics, chaos theory, and complexity studies did not effect widespread change in our systems of knowledge and our institutions, perhaps because most people considered them too abstract to be relevant, but the new wave of discoveries are very concrete and accessible (many are in human physiology). The applications of these recent and unexpected findings about dynamic interrelatedness as the way of the world are now transforming every mainstream field of human endeavor. All our basic assumptions (built on the old idea that everything in the physical world is essentially separate and functions mechanistically) are being reconsidered. No longer a marginal perspective, the Relational Shift is based on the realization that all entities in this world, including humans, are thoroughly relational beings of great complexity that are both composed of and nested within networks of creative, dynamic interrelationships. Nothing exists outside of those relationships. As we try to grasp the interrelated nature of reality, emergent relational approaches are already transforming the way we educate our children, attend to our health, design our hospitals, green our communities, and rethink economic activity. New analyses of the crises of modernity and abundant new solutions are the result.

Chapter 6 Stepping Up
Reassessing the “Field Dependence” of Women
An Example of Applying the Relational Perspective: The Debate over the Origins of Religion
The Relational Calling

Examples of Recent Findings on the Relational Nature of Reality:

Relational Reality example #1: In a series of four studies in 2009, people shown slides of entirely human-made environments were surveyed afterward and ranked money, fame, and/or power as the highest values – but people shown slides of nature photography afterward ranked caring, generosity, and personal relationships and community as their prime values. Nature enables us to be our true, caring, generous, and expansive selves. It seems to free us of … self-absorption, disengagement, and diminished empathy. (Relational Reality, p. 202)

Relational Reality example #2: A study of 906 elderly adults in 2009 found that those with fewer friendships and other social interactions experienced a more rapid decline in motor function such as walking, gripping, and balancing. Truly, we are relational beings. (Relational Reality, p. 2)

Relational Reality example #3: Many studies since 1973 have found that when an IQ test is given to young adults, first-born individuals tend to score a few points higher than do siblings who came later in the birth order of the family. However, in 2007 a study in Norway of the records of 241,310 19-year-old males doing their military service found that if the first-born child in the family had died and the second-born was raised as the eldest, he then scored the extra points on the IQ test at age 19. Moreover, if the first two children had died and the third-born was raised as the eldest, he at 19 scored the extra IQ points. Intelligence is not, after all, a fixed inheritance at birth, and birth order is not, after all, the determining factor. Rather, the development of intelligence is partially a result of relational dynamics between parents and child. (Relational Reality, p. 2-3)

Relational Reality example #4: Researchers ascertained in 2007 that for people of all ages ten minutes of talking with someone, in person or even by phone, boosts mental performance and memory as much as doing crossword puzzles for the same amount of time. Moreover, it was found that the more social contact people have, the higher their level of mental functioning. (Relational Reality, p. 2)

Relational Reality example #5: The biomechanical orientation in modern medicine was never able to explain why some people catch cold far more than others, even if they eat well, exercise, and take Vitamin C. In 1997, though, researchers at Carnegie Mellon University designed a postmechanistic experiment -- and discovered a substantive, if partial, answer. They sprayed a cold virus directly into the noses of subjects and then correlated the connection between those who had an thriving social network and those who developed a cold. They found that those people with more friends were four times less likely to come down with a cold after they received the virus. That is, most people have by now heard that having friends is vaguely good for one's health overall, but this study shows how direct and significant the effect is on our immune system. (Relational Reality, p. 73)

Relational Reality example #6: What factors predict significant psychological stress in college students? The old, Freudian model would have posited a thorough separation from one’s mother and father to be key in well-adjusted young adults. A study in 2005, however, found that the protective factors were entirely relational (not separative): “secure parental attachment; authentic, empowered, and engaged community relationships; and, for the women especially, peer relational quality.” (Relational Reality, p. 58)

Relational Reality example #7: Living near green, open spaces has been found to decrease the incidence in urban residents of depression, anxiety, and a range of diseases such as asthma, diabetes, intestinal problems, and back and neck pains, according to a study in 2009. (Relational Reality, p. 101)

Relational Reality example #8: We need sunlight and some long-distance focusing to protect our eyes from myopia, the incidence of which increased by 66% in the US between 1970-2000. A study in 2008 found that 12-year-olds who spent more than 2.8 hours per day playing outdoors (which few children do today) were less likely to develop myopia, regardless of time spent on computer or video screens. (Relational Reality, p. 97)