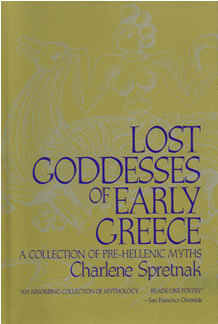 Lost Goddesses of Early Greece: A Collection of Pre-Hellenic Myths

For thousands of years before the classical myths were recorded by Hesiod and Homer, the spiritual presence of the Goddess in her myriad forms was the focus of religion and culture. in Lost Goddesses of Early Greece, Charlene Spretnak re-creates the original, goddess-centered myths and illuminates the contemporary emergence of a spirituality based on our embeddedness in nature. Drawing from evidence in archaeology, classics, and early Mediterranean histories, she presents a restoration of the pre-Olympian myths of Gaia, Pandora, Themis, Aprhodite, the Triad of Artemis/Selene/Hecate, Hera, Athena, and Demeter and Persephone.

"An absorbing collection of mythology ... a well-documented text that reads like poetry."
- San Francisco Chronicle

"The book is essential ... both academically accurate and a personal medium of passage."
- CoEvolution Quarterly

"A basic text of the goddess movement that has spread through feminist and ecological circles for a decade."
- Boston Globe

"Charlene Spretnak rediscovers the goddesses' early significance and in fascinating portraits restores them to their original glory."
- Publishers Weekly

"Charlene Spretnak has succeeded extremely well in presenting pure characterizations of the Old European goddesses as they were revered for millennia, long befor the Indo-European elements were imposed to create Olympian mythology."
- Marija Gimbutas, Author of The Language of the Goddess

"Spretnak's treatment of the myths is most impressive."
- Prof. Walter Burkert, University of Zürich, Author of Greek Religion


Lost Goddesses of Early Greece was published originally by Moon Books, Berkeley, CA, in 1978. Subsequent editions were published by Beacon Press, Boston, in 1981 and 1992. The book is still in print and is available from Beacon Press or through book retailers.